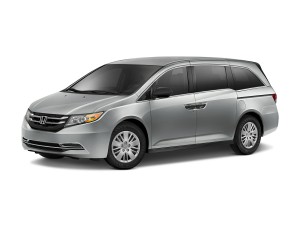 Well, the Honda Odyssey has done it again. In the class for which it was designed, it has taken top honors. Somewhere, there are tiny people dancing in car seats, celebrating the news.

In the U.S. News & World Report’s annual “Best Cars for Families” awards, the 2014 Honda Odyssey received the award of “Best Minivan for Families,” one of the most competitive categories historically. The Odyssey nosed out the 2014 Chrysler Town & Country and 2014 Toyota Sienna for the top spot.

Not only was the Honda Odyssey selected by USNWR as the top minivan, but it also finished 2013 as the best-selling minivan of the year in the U.S.

Mike Accavati, senior vice president of automobile operations for American Honda, summarized the vehicle’s reputation in light of the honor: “The Odyssey was designed to excel in one of the harshest environments on earth – daily family use. Being named ‘Best Minivan for Families’ four years in a row speaks volumes about the Odyssey’s singular commitment to be the ultimate family vehicle.”

A darling of critics, the 2014 Odyssey also has received top picks from prominent online automotive review websites, including Edmunds.com and Kelley Blue Book.

The Odyssey sped (safely, and in a controlled manner) to the finish line on safety ratings, receiving a 5-star crash test safety rating from the National Highway Traffic Safety Administration (NHTSA), the highest possible rating. Additionally, it was the only minivan to qualify in 2014 as an IIHS Top Safety Pick+, having across-the-board “Good” ratings in every crash test category.

The 2014 Odyssey also includes the innovative HondaVac™, an in-vehicle vacuum system allowing owners to retrieve breakfast cereal, pacifiers or action figures from between seat cushions while on the go. C’mon, admit it. We’ve all been there.

While the 2014 Honda Odyssey has class-leading safety ratings and fuel economy, the roomy seating for up to eight passengers and the responsive-and-fun handling keep this minivan at the head of the pack for the quality of experience for both driver and family. And with an EPA mileage rating of 28 mpg Highway* for 2014, the Honda Odyssey is the most fuel-efficient eight-passenger minivan on the market.

* Based on 2014 EPA mileage ratings. Use for comparison purposes only. Your actual mileage will vary depending on how you drive and maintain your vehicle.