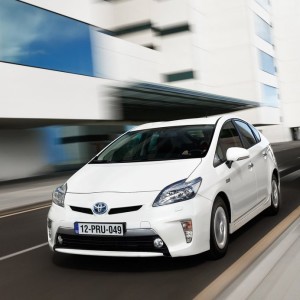 Everywhere I turn in traffic, a Prius seems to be there, too.

Apparently, it isn’t my imagination.

The iconic gasoline-electric hybrid vehicle, the first mass-produced hybrid passenger car, which also has been around for 16 years in one form or another, recently surpassed the three million mark in cumulative worldwide sales, reported Toyota Motor Corp. (TMC).

“Such a figure puts the Prius’ own success into perspective. While Toyota now produces a wide range of hybrid vehicles, it’s the core line which still sells in the greatest numbers, and in certain locales – California being a prime example – it counts itself among the highest-selling cars of any type,” according to Antony Ingram in The Christian Science Monitor.

Following its 1997 launch, Toyota developed and marketed a second-generation vehicle in 2003 and a third-generation hybrid in 2009. “From the first to the third generation, TMC greatly reduced the cost of the hybrid system by two-thirds and increased fuel efficiency about 35 percent,” the company said.

Toyota also announced that $7.9 billion US will be spent on research and development of new platforms and to improve existing ones, and that the company will continue to pioneer the clean transport with focus on “environmental technology development,” wrote Vishal Malthur at thinkdigit.com. Most of the Prius sales occurred with the second- and third-generation models.

Prius ranks 16th among top-selling vehicles for the first half of 2013, according to Examiner.com.

For more on the impact of alternative vehicles, see our “Green with Envy” infographic, which takes a look at their “small, but increasing influence on American motorists and driving.”

If you need fast-and-easy vehicle financing or refinancing for a used or new car, SUV, crossover or pickup, “green” or not, visit RoadLoans to get the process started.