I grew up living with my grandmother, so I knew that my first car wouldn’t be anything special. But, I was still excited when “Momma Nancy” told me that she had a friend who was getting rid of his old car. Most of my friends had gotten their cars while in high school, and here I was in college and still no wheels. 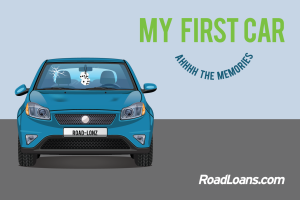 I had saved up a little money from my summer job, but it wasn’t going to be enough to get anything shiny and new. I didn’t care. I was tired of bumming rides with friends to the grocery store and student center. I was ready to get behind the wheel of my very own ride. I would have taken anything.

Good thing because what my grandmother drove up in was hardly what you would call a dream come true for a first car, or any car for that matter. It was a light blue, 1983 Ford Crown Victoria. The year was 1989. I felt anything but regal when I drove it but hey, it was better than nothing…barely.

I went to a college in my hometown of Dallas, Texas, so I didn’t have to worry about long commutes back to school. Thanks goodness. The car, Lucinda as I liked to call her, burned just as much oil as it did gas. Exhaust billowed from the tailpipe, leaving a cloud of smoke in its wake.

When I drove around on campus, my friends would tell me that my car reminded them of the police or campus security. So, I learned not to be offended when people scattered from parties whenever I pulled up. The car’s air conditioning worked in the winter and the heat in the summer. It was a lemon on the grandest of scales, but it was my car.

Despite all of the obvious flaws, Lucinda became a campus favorite. She was a hit when it came to going out. She sat four to five people, depending on whether you didn’t mind sitting on the hump in the middle of the back seat, and she handled well in any types of weather. While she may not have been easy on the eyes, Lucinda more than made up for it in dependability. Other than changing the tires and keeping a quart of oil in the trunk at all times, she never needed coddling. Instead of running from Lucinda, many began to look forward to taking a spin in the most noticeable car on campus.

It was the first of many lessons learned about not judging a book by its cover. Lucinda certainly wasn’t the best in class, but she was in a class all by herself. Everyone who rode with me loved the quirky imperfections that made her special.

I have had many cars since then… cars that are undoubtedly nicer, of better quality and higher performance. But I can honestly say that no other car has brought a smile to my face like the memories of my time with Lucinda.

Written by: on December 22, 2016
Category: Entertainment