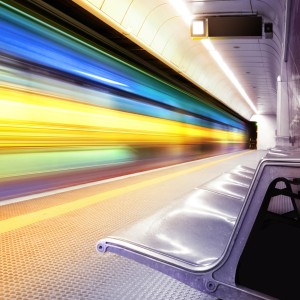 How would you like to go from Los Angeles to San Francisco in less than 30 minutes, paying less than what you would pay for a plane ticket? If the “Hyperloop” concept is adopted as a fifth mode of transportation – alongside cars, trains, planes and boats – it could revolutionize travel, especially for distances separated by 900 miles or less.

Elon Musk, the visionary behind the electric car-firm Tesla and spaceflight company SpaceX, has described his Hyperloop concept as “a cross between a Concorde (supersonic plane), a rail gun and an air hockey table.”

“I originally started thinking about [Hyperloop] when I read about California’s high-speed rail project, which was somewhat disappointing,” said Musk at a Google Hangout with Richard Branson.

“It’s actually worse than taking the plane. I get a little sad when things are not getting better in the future,” Musk said. “Another example would be like the Concorde being retired and the fact there is no supersonic passenger transport. I think that is sad. You want the future to be better than the past, or at least I do. ”

Here are some interesting snippets about the Hyperloop:

“You want a transport system that is roughly twice as fast as the next best alternative, that costs less, that is safer, that is not subject to weather and is more convenient,” Musk said.

The Hyperloop will cost around $6 billion, “more than Tesla, SpaceX and Solar City have spent, combined.”

Hyperloop plans are based on an open-source design, letting anyone use or modify them. Given that, it seems safe to assume the Hyperloop has a way to go before becoming reality.

The visionary already has a lot on his plate. “I don’t have any plans to execute, because I must remain focused on SpaceX and Tesla,” said Musk, according to the Associated Press.

Musk will invest his own money in the project, and hopes that others will, too.

For more information, check out this awesome infographic: http://www.gocompare.com/travel-insurance/inside-musks-hyperloop/

Written by: on August 13, 2013
Category: Entertainment