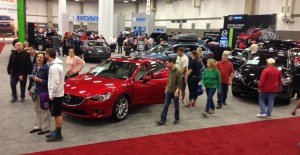 That phrase might apply to the DFW Auto Show last weekend at the Dallas Convention Center.

Whether you were there to see the model 2014 and 2015 vehicles on display or shopping for a possible purchase, as we were, the auto show had plenty to keep a visitor busy.

It was not easy to stay focused under the bright lights as shiny new vehicles of all shapes, sizes and flashy colors competed for our attention and that of thousands of other visitors. But we carefully planned our reconnaissance mission on the map provided by the auto show, and then hit the floor.

With about 40 manufacturers represented by more than 700 vehicles spread across the better part of 650,000 square feet of the convention center, we focused our attention on cars and CUVs that made our preliminary list of about a dozen vehicles before looking for the Ram 1500 ride-along obstacle course, and the luxury car area, which featured the $1.6 million Italian supercar, Pagani Huayra.

Just for the record, my favorite car in the auto show was the new-look Aston Martin Rapide S in “appletree green,” called “the world’s most beautiful four-door sports car.”  I wasn’t going to argue.

But, more realistically, the Toyota Avalon and redesigned Chevrolet Impala also got our attention. Among CUVs, the Honda CR-V, Subaru Outback and redesigned Nissan Rogue made strong impressions. And we discovered that we have a fundamental divide over whether we are shopping for a car or a crossover utility vehicle, I preferring the former, my wife the latter.

Outside the convention center, the auto show’s annual ride-and-drive event provided auto show attendees with the chance to  test drive a variety of cars, trucks and SUVs from Chrysler, Jeep, Dodge, Ram and FIAT; Chevrolet, Buick and GMC; Cadillac; Ford; Kia, and Mazda.

When we finally had our fill of climbing in and out of vehicles – driver, front and rear passenger areas – slamming doors, checking trunks and cargo areas, nitpicking designs, we visited the Ram truck area, where a long line had formed for the ride-along obstacle course. And for those who didn’t take a ride in a new Ram 1500, just watching the pickup perform was an activity itself.

At the other end of the auto show, the Pagani Huayra, with its open doors and rear-engine hood, also was drawing a crowd with its racy interior and exterior design and the engine itself.

And my reward for all the shopping was getting the chance to take a close-up look at the Aston Martin.