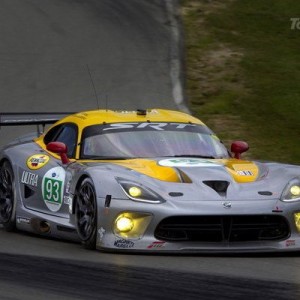 SRT Vipers returned to the 24 Hours of Le Mans, after an absence of 10 years, with a successful test day Sunday at Circuit de la Sarthe. The two Vipers finished with the ninth and 10th fastest times during the second session on the course, reported newspress USA.

The No. 93 Pennzoil Ultra SRT Viper GTS-R driven by Jonathan Bomarito, Kuno Wittmer and Tommy Kendall had the ninth quickest time of the session – 4:01.734. The No. 53 SRT Viper driven by Marc Goossens, Dominik Farnbacher and Ryan Dalziel finished at 4:03.281. The No. 93 finished just behind three Aston Martins, two Porsche 911s, two Corvettes and a Ferrari Italia.

The eight-hour full field test was broken down into a pair of four-hour timed sessions that included mandatory on-track time for rookies at the 8.469-mile street circuit southwest of Paris. Rain was a factor during the morning practice session, limiting on-track time for all classes and slowing the pace on the track. The day provided race engineers the opportunity to gather critical data in preparation for the twice-around-the-clock event, scheduled June 22-23.

Viper’s Le Mans absence followed three consecutive years of success in the GT class in 1998-2000. Here is a short announcement from Chrysler Group of Viper’s re-entry at Le Mans:

Two identically prepared SRT Viper GTS-Rs will return to the Le Mans stage for the first time since finishing one-two in the GTS class three consecutive years – 1998-2000. SRT Motorsports accepted an invitation in February from ACO to field the two-car team in the LM GTE Pro class.

“Racing is a cornerstone of Viper’s illustrious history,” said Ralph Gilles, President and Chief Executive Officer – (SRT) Street and Racing Technology Brand and Motorsports, Chrysler Group LLC. “Le Mans is a world stage. The GTS-R has enjoyed great success at Le Mans in the past and we’re excited to start a new chapter of Viper racing at that historic venue.”

“Racing is a big part of everything that SRT does,” said Beth Paretta, Director of Marketing and Operations – SRT Brand and Motorsports. “Racing is in our name – Street and Racing Technology – so the line is very blurred between what we do on the road and what we do on the track.

“We’ve enjoyed some past success at Le Mans, so you want to not only show well, but also run competitively on the track,” Paretta said. “The whole motorsports world is watching and it’s extremely exciting for us to be part of it and a big challenge to do well.”

The SRT Viper is a product of Chrysler Group LLC.