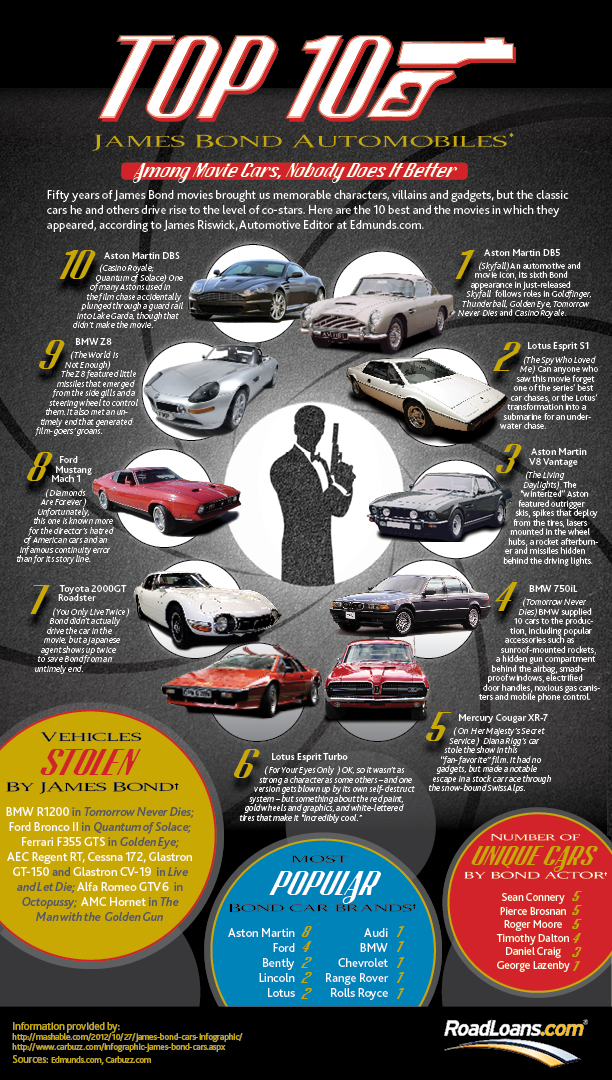 Among Movie Cars, Nobody Does it Better

Fifty years of James Bond movies brought us memorable characters, villains and gadgets, but the classic cars he and others drive rise to the level of co-stars. Here are the 10 best and the movies in which they appeared, according to James Riswick, Automotive Editor at Edmunds.com.

One of many Astons used in the film chase accidentally plunged through a guard rail into Lake Garda, though that didn’t make the movie.

The Z8 featured little missiles that emerged from the side gills and a steering wheel to control them. It also met an untimely end that generated filmgoers’ groans.

Unfortunately, this one is known more for the director’s hatred of American cars and an infamous continuity error than for its story line.

Bond didn’t actually drive the car in the movie, but a Japanese agent shows up twice to save Bond from an untimely end.

#6 – Lotus Esprit Turbo (For Your Eyes Only)

OK, so it wasn’t as strong a character as some others – and one version gets blown up by its own self-destruct system – but something about the red paint, gold wheels and graphics, and white-lettered tires that make it “incredibly cool.”

Diana Rigg’s car stole the show in this “fan-favorite” film. It had no gadgets, but made a notable escape in a stock car race through the snow-bound Swiss Alps.

The “winterized” Aston featured outrigger skis, spikes that deploy from the tires, lasers mounted in the wheel hubs, a rocket afterburner and missiles hidden behind the driving lights.

Can anyone who saw this movie forget one of the series’ best car chases, or the Lotus’ transformation into a submarine for an underwater chase?