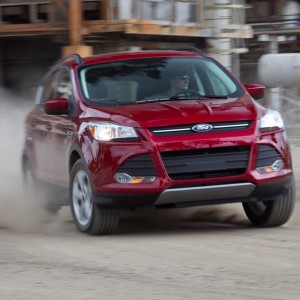 And lists of top-rated automobiles, whatever the ratings system, are among our favorites.

One of the most interesting we spotted recently is “FindTheBest” (FTB) – 2013 model vehicles in this case – at cars.findthebest.com, which promises “unbiased, data-driven, comparisons.”

“With 890 [current model] cars to choose from, we can help you find one (to meet your needs),” says the website. “A car is a huge investment, so it’s important to get the one that’s right for you.”

At the top of the FTB listing is the 2013 Subaru BRZ, followed by the BRZ Limited, the Scion FR-S, a trio of Ford Escapes – the Escape, Escape SE and Escape SEL – and the Escape Titanium (See photo). The top seven vehicles overall were rated 100 or 99 on the FTB “Smart Rating,” which ranges from 100 to 84.

FindTheBest: 2013 model cars, pickups, SUVs on this list by category are:

Cars are “ranked higher when they excel in multiple areas, such as Performance, Safety, Fuel Efficiency, Fit & Finish and Appearance,” as well as price. Standards are defined by experts, including automotive industry publishers such as Car & Driver, Motor Trend, Popular Mechanics, Yahoo! Autos, The Car Connection, and others, according to FTB, as well as auto safety organizations.

For lots more details and analysis, visit the FindTheBest website.