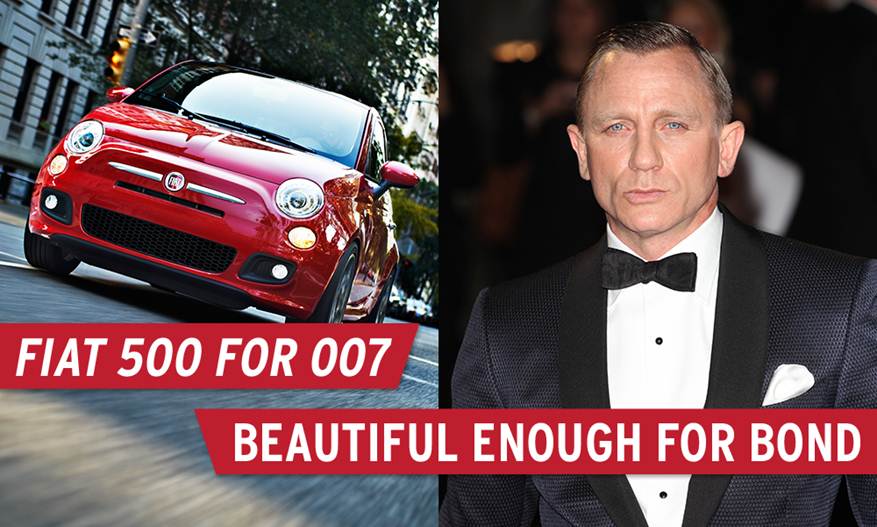 James Bond has driven some seriously great cars. And Fiat’s 500 micro sedan is about to become a member of that stable.

In the upcoming Bond film, “Spectre,” the latest in the James Bond franchise, it is rumored that James Bond, who will again be portrayed by Daniel Craig, will be racing through the streets of Rome, Italy, in the popular economy sportster. And the internet has plenty to say on the subject.

The issue of “which vehicle James Bond is driving now” has been, for car enthusiasts, an epic story since the beginning. In fact, we covered the topic of great Bond cars last year. There are, of course, the classics for the purists, like the Aston Martin DB-5, whose models have been the standard by which all other Bond cars are measured. And in “Spectre,” we can expect to see the big, shiny new brother of the whole family: the new Aston Martin DB-10.

Of the others – and there are many, many others – Audis, BMWs, Bentleys, Rolls Royces, and other exotics have graced the screen as chariots of the espionage executive, along with machines of pure mechanical muscle, including Maseratis, Mustangs and more than one monstrous Mercedes.

In an instance that must have resulted from a jaded attitude toward tedious, horizontal travel, Bond even piloted a one-man micro-helicopter (autogyro): the Wallis WA-116 in the movie “You Only Live Twice” (1967).

With the Fiat 500 as his auto du jour in “Spectre”, Sky News reports rumors that Bond will drive in a high speed chase through the streets of Rome, with the vehicle ultimately being crushed (presumably without its driver) near the Vatican.

The description of the scene, given the styling of the Fiat 500, and the urban Roman locale, resounds of like adventures featured in “The Italian Job” (1969), in which a group of thieves executed a heist on the streets and sidewalks of the city of Turin by causing a traffic jam and used svelte and stylish Cooper Minis to escape pursuers. That film featured some of the most daring car chase sequences that audiences had the opportunity to enjoy at the time, and if “Spectre” follows suit, this writer would like to opine that we can expect Daniel Craig’s Bond to keep with the action-driven tradition of his franchise and “blow the bloody doors off.”

Kudos to Fiat for another model added to the Bond vehicle roster, and congrats to Daniel Craig and Sam Mendes, the film’s director, for keeping the tradition of style and excitement alive.

Written by: on December 5, 2014
Category: Entertainment